A Second Chance at Love. Have you read it?

A weak ago, I re-released A Second Chance at Love. I had waited a long time to get my book out there and now I wait for the reviews. I think my book is good enough to read. My editor enjoyed the story and I received three reviews, but most of them are not verified purchases.
So why aren't you reading?

The other day I started reading it myself. I couldn't believe how good my story had gotten. Sometimes I amaze myself.  It wouldn't happen without my amazing editor Martha Reineke. I just wish all you would see how much better it is now.
The cost of my e-book is only $2.99. Can you beat that? Reason it's that low is because my book is a novella. You could read my book in one day. Give you a little incentive, here is a snippet of my book: (Not for reproducing of any kind):
A light radiated from Marge’s window. His nerves fired up, as the cloaked woman wasn’t in sight. Carter stepped out ready for action. He’d use his charm to win Marge over. What woman wouldn’t be impressed?
“You can do it!” Martin cheered him on. Martin had more faith in him than he had in himself.
Carter entered numbers into the call box, and the gate opened. He strolled to her apartment. He was the man for the job.
Music spilled out of her apartment, and he stopped mid-stride. What kind of music was that? He didn’t peg her to listen to Christian music. Was her friend there? He tilted his head and narrowed his eyes. The lyrics spoke of healing. Marge sought healing from a song?
He went completely still. Had Marge changed before his eyes? He had to find out. He rushed to the door and knocked. “Marge, are you okay?”
The door swung open. Marge’s eyes glistened. He wanted to reach out to her as Carliano, but he represented his employer. “Are you okay?” He drew his eyebrows together in concern. “Are you sick?”
Her green eyes were red from crying, and she giggled. “A song spoke to me.” She went to lower the volume, then sat on the couch, leaving the door open.
A song spoke to her? His mind went blank. Gone were questions he wanted to ask. “It can’t be possible,” he thought out loud.
Her mouth fell open. “What’s not?” Her eyes implored him.
“You letting a song speak to you.” He shook his head.
She shrugged. “So why did you come? To see me cry?”
“I...uh...”  What could he say? He couldn’t wrap his mind around what he had heard and witnessed.
“I have a question I’ve been wanting to ask. Are you over me?” Her question made the butterflies squirm. His mind hadn’t thawed from his discovery. Over her? What did she mean by that? He was about to answer, but the words wouldn’t come out. When he didn’t respond, she narrowed her eyes. “Is that why you didn’t write me?” She clenched her jaw.
His adrenaline fired up. He had written her! What did she mean by that? She was the reason why he had come to the states. He shook the thoughts from his head and remembered his job. “Maggie, I don’t know what happened to you, but my employer can help. Please come with me.” He offered his hand.
I can guarantee you that you will enjoy reading my book. If you had it when it first came out or when it was titled Marge, you would see a major difference and improvement. Click this link to download it!  A Second Chance at Love 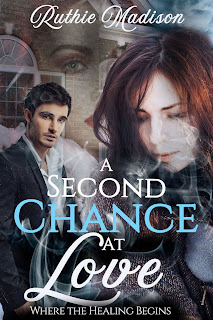 Posted by Ruthie Madison at 2:30 PM